Different Airflow operators create more possibilities while designing a scheduled workflow. Being aware of those enhances our way of dealing with real-world problems. *

There are many Airflow operators that keep impressing me during my daily job. Recently, I played quite a bit with the GCP operators within Airflow. In this write-up, I would like to first provide an overview of the Airflow Cloud Providers (used to be called contributor operators before Airflow 2.0, see). Then I would like to share one of the example Directed Acyclic Graphs (DAG) workflow models, created for this toy project.

Summary of the Airflow Cloud Providers

In the world of Airflow cloud providers Google package, which is also valid for Amazon Web Services (AWS), we have four main sub-groups of functions:

1. Operators: They enable us to execute read/create/delete/update/trigger tasks. Operators do not need to be running CRUD operations on datasets. They can also invoke a GCP function. Some examples and their example use cases:

2. Hooks: They are flexible clients, enabling us to interact with cloud providers. Hooks are the underlying clients in the operators, we can create customised functions (Python callable) or operators with those. Some examples are listed below. All include the methods for CRUD operations in the services they mention in their name:

3. Sensors: They are simply checkers. They check if data exists in a certain location. They can be used mostly for checking if a certain operation is completed. Some examples and their example use cases:

GCP operators in Airflow can be summarised as in the following chart:

We need a GCP connection (id) on Airflow, to have a functioning setup for Google Cloud operations on Airflow. The GCP connection can be set via configurations (some DevOps effort), or it can be set through the Airflow Web UI. It is explained in Airflow's documentation. Each of the GCP task that we create, to enable authorisation, we need to refer to the GCP connection id.

The example DAG is shown in the following chart. With this DAG, I aim to load a partitioned table into the Google Cloud Storage (GCS), then compose the multiple files generated by the previous process.

Each task within this DAG can be considered as a kind of GCP configuration. They are explained as follows:

The task retrieves a partitioned table from BigQuery and exports into a GCS bucket. For each partition we create a separate gzipped text file (compression, export_format). Just to create a set of assumptions, I do not want to have the header row (print_header), and I use comma (,) as text file delimiter (field_delimiter). The partitions are created with the wildcard (*) character in the end of the file name (destination_cloud_storage_uris).

GCP operators do not provide a full-fledged solution when it comes to the problem of composing multiple text files into one gzip file. Thus we need to create our own customised functions (Python callable) or operators (see this documentation).

The Python Operator, in my example DAG, calls a mysterious function (compose_files_into_one) with bucket_name, source_object_prefix, destination_object, gcp_conn_id parameters. Those parameters are provided as keys in the Python Operator's op_kwargs argument.

The compose operation can be summarised with the following chart: 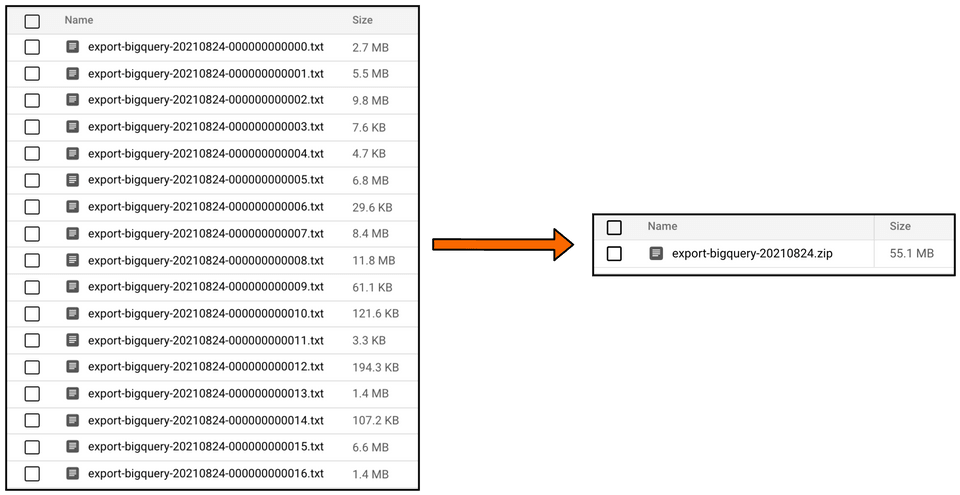 In the end of the compose task, I have the partitioned datasets as well as the already composed gzip file in the GCS bucket, so we had the same data twice as in multiple files and in a compact gzip file.

As a conscientious developer I want to delete the remaining partitions from the bucket and keep only the compact gzip file. Thus, I use GCS Delete Objects Operator to create the last task of my example DAG.

GCS Delete Objects Operator does not require much of a configuration. It needs a bucket_name, a gcp_conn_id, and a prefix parameter. With the prefix parameter, we can filter out the objects to be deleted. So, if the partitions start with <defined_text_file_name>-<partition_number>, then we can use <defined_text_file_name>- to filter out all the partitions to be deleted.

GCP operators in Airflow are quite extendable and lightweight, and they require a small amount of configuration. Most of the operators are well-fitting for the use cases that I am able to think of. This write-up is a result of my appreciation of this nicely evolved providers package of Airflow. With every release of the providers' packages, yet another shortcut is added in the lives of data programmers. This is another good example of how being aware of those shortcuts can make our workflows more reliable and maintainable.

To have a look at the whole example DAG, with its Docker-compose setup, you can refer to its Github repository.

(*) This reminds me a lot of the godly boons I got when playing Hades, which are limited upgrades acquired by the protagonist, Zagreus. Gods randomly provide upgrades (boons) in Zagreus' (the protagonist of the game) journeys. Those upgrades make Zagreus' life easier for some time, exactly like the Google Cloud Platform (GCP) operators in Airflow being boons that make our lives easier for a while.